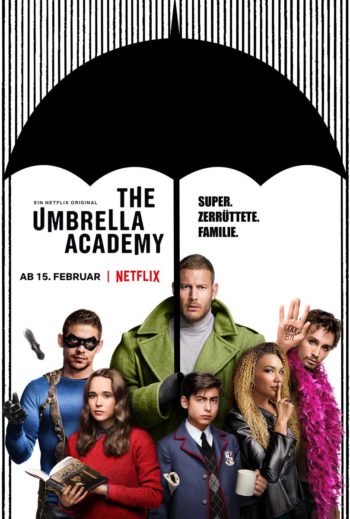 Thx to Netflix for trusting us doing the German version of The Umbrella Academy, one of the 10 most popular series in the US in 2019.
It is an adaption of the eponymous comic by Gerard Way and Gabriel Bá. It was up to us finding convincing German voices for the wacky and unique characters with superpowers like, “I talk to the dead – but only on drugs” or “I’m a gorilla – except for my head”.

Thanks to the well-written German dialogue scripts by Jan Fabian Krüger, we were able to, under the direction of Ralph Pel, make use of the crème de la crème of German voice actors: Anne Helm (as voice talent for Vanya), Julius Jellinek (Klaus) and Dennis Schmidt-Foß (Hazel) among others.